“Having a sound business reputation is good; however, in case, you are experiencing a social media-driven crisis, there are effective ways you can follow to come out of that drastic situation. Giving a more sincere response, monitoring your scheduled posts at time of crisis, comprehensively evaluating your social strategies are some of the ways you can adopt in this regard.”

In this fast paced digitally-driven world, while its crucial to have a sound business reputation, its also equally important to carry the same dignity forward in the coming time. Social media-driven crisis may be a common thing nowadays due to the increasing levels of competition besides dis-satisfaction level in users.

It may possibly happen that one of your former customers that had a so-called bad experience accidentally tweets a bad remark for your company. Its there when the crisis starts germinating. Identifying whether you have an online reputation crisis may be easy as it can be made out from the comments, tweets that are against your company.

Consider for example the graph below that shows the impact on an apparel company's online reputation after the company's defective pants were officially reported by customers. The colored bars indicate the severity of the words used by customers to describe about the company over Twitter. 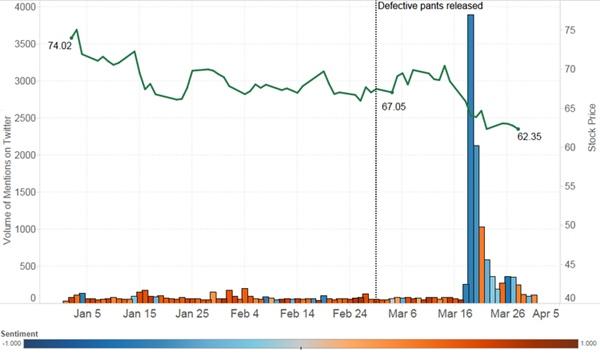 However, the challenging part is the approach to be followed to tackle the crisis situation. You will find several online brand reputation services providers that may suggest different methods for recovering from the situation. Here, we bring to you effective ways to manage your social media crisis situation.

Respond Quickly  – Never leave any offending posts on any of your social media accounts. You must act quickly to get them fixed without delay. Most effective way would be to filter out such bad posts and issue your apology, if you are actually guilty.

Be More Sincere – Giving a copy-paste response is actually the worst crisis response as it blankets networks with already prepared remarks; which may further offend the annoyed customer. Its actually when you put across a sincere, human reply to the customer's concerns that the issue gets handled in a better manner. Not always, but at times, you can also make use of some humor to make the situation a bit easy-going.

Monitor Scheduled Posts – While you are responding to an existing crisis, ensure that any earlier scheduled marketing posts are not published. Keep all scheduled posts suspended and other unrelated posts unpublished until the current crisis situation has been addressed & is under control as per your social management plan.

Update your Response Plan – Once the issue has been addressed, make a comprehensive evaluation of your social strategies & tactics. It would also encompass limiting your social account login access to only the experienced & reliable community managers so that none of your former employees can post something online against your brand's reputation.

Payel Bhattacharhee has a degree in Mass Communication and is working as a Web Content & Social Media Expert at SynapseInteractive with 6+ years of experience in the fields. She carries a good understanding of the Online Marketing industry; and her eagerness to know & learn about new technologies & latest happenings in the genres helps her in providing the desired insights about them through her copies.