Home >> Blogs >>    Why SEO Companies are Afraid of Google Updates?

Why SEO Companies are Afraid of Google Updates?

“If you are doing it wrong, Google is going to stop you, no matter what! As the prime motto of the search engine giant is to stop SEO companies in indulging into wrong promotional practices; thus, Google algorithm updates are rightfully turn out to be nightmares for SEO companies. In this article we will be discussing few such reasons why one should be afraid of Google.”

The Go By the ‘Good deeds’, according to Google

While answering the very subject of this write-up one thing which must be cleared is that not everyone is afraid of Google updates. Being a SEO company does not mean like having nightmares about Google’s update all the time. This statement is apt for those rotten apples who practice negative or black hat SEO tactics and not those who follow the guidelines shared by Google for practicing SEO. Google has always kept it very simple while setting the standard approach path for search engine optimization over the years. Two golden rules it states are ‘good content means great result’ and ‘being authentic with your approach gives better result’.  Being said both these, people often try to find shortcuts in their approach towards SEO and in the process gets in Google’s ‘rotten apple’ list. These are the firms who are always in the fear of updates as they know that they have not been following right practices while performing the task.

The meaning of golden rules

Over optimization has been like a disease in the internet marketing niche off late. Content is the prime thing which defines any website in the eye of Google and also makes it useful for any user. As the prime reason of creating the search engine was to offer the finest results on any topic to user, the maximum emphasis is given over useful content while judging the quality of any website. This is the prime reason behind content being king. Also, in the present scenario social media with its massive effect over any internet marketing campaign has substantial amount of dependency over quality content. This is the time of indirect marketing and social media posts with enticing content draws users towards any brand eventually giving them a push into the door of sales.

Secondly, being authentic serves you well in any situation. All those business owners who have been sharing real faces behind their organization or even real pictures and real time project scenario in their blogs are getting much boost in their ranking. This can be understood from the fact that Google is paying great deal of importance to authorship now. Also, it builds the trust factor in the mind of your targeted audience. If you get SEO services from India you can be rest assured that all these points are taken care of.

Why cheap companies are scared of updates?

Mostly the fear lurks in the mind of those companies whose prime idea about SEO is all about directory submission, link building, and article submission kind of initiatives. They never ensure a planned approach and keep using same information all the time in all of their posts. This not results in spamming, but also being affected by updates.

It is been said by Google that 3.1% of all English queries were hit by Penguin update which was released in April 24, 2012. Just a look over the sites material shows the reason of their panic. Most of them have been indulged in negative SEO. This is why they have to suffer with heavy penalty. Lets share some of the points for which penalty might be faced:

The graph shared by SEOmoz graph of Top 10 ranking changes around April 24th shows how bad that effect of updates like penguin and panda were. 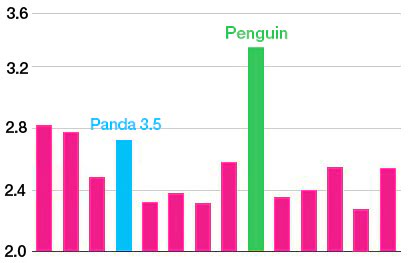 It’s never too late when you are carrying out any internet marketing project or have hired a company to do so for you. Make sure to only perform tasks that relates with your business and keep contributing to the internet in the finest of way. Best way is to tell the whole world about your brand’s uniqueness, workforce, and services in the most honest way through useful content.

The author has produced & edited several articles and related informative material for a range of genres including web design & development, software development, Internet marketing etc. He likes to create informative content to educate readers regarding the current tech trends, while remaining engaged in a host of online promotional activities for his organization.